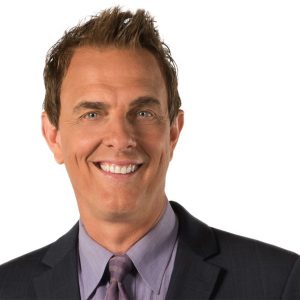 Never truly good enough to play college or professional sports, Eric Perkins decided to talk about them instead. Perk as he's better known, grew up immersed in sports, but also in television. His father Jack was an NBC Nightly News correspondent for decades before becoming the host of Biography on A&E. Perk combined his two passions and became a sportscaster where he worked in Tupelo, Memphis and Atlanta before finding his way to Minnesota where he currently serves as the sports director for the NBC station (KARE-TV) in the Twin Cities.

Since joining KARE in the late 90's, Perk has won several Emmy Awards for TV work. He's covered Super Bowls, Final Fours, All Star Games and even five Olympic Games. But he's perhaps best known for his Perk at Play segment, in which he's taken part in everything from Skydiving to Demolition Derby, playing tennis with John McEnroe and being body slammed by Brock Lesnar during the decade long run of the segment.

Perk is very involved with local charities and often can be found serving as an emcee for galas, fundraisers, or awards ceremonies throughout the state. Over the last few years, Perk has emceed events for Gillette Children's Hospitals, Children's Cancer Research Fund, Second Harvest Heartland, Spare Key Foundation, St. Jude and many others. He even created his own charity event, Perk's MessFest. The "slopstacle course" for kids is now in its fifth year, and benefits the Pinky Swear Foundation which helps families dealing with childhood cancer. Perk also regularly emcees that Foundation's annual gala as well.

Perk lives in the western suburbs of the Twin Cities with his wife, three children and cockapoo.