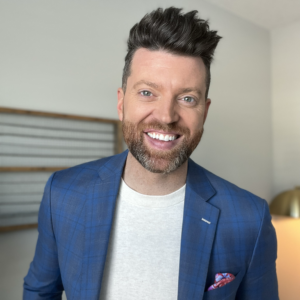 Steve Patterson is a veteran entertainment television and radio show host, whose energy and quick wit keeps audiences engaged from beginning to end! His ability to read a room and go off the cuff, combined with his skill to smoothly execute a show flow sets him apart as a truly unique talent.

Patterson hosts the long-running afternoon TV show Twin Cities Live, in addition to co-hosting the Donna and Steve radio show on MyTalk 107.1FM. He's gained national recognition for his numerous appearances on LIVE! with Kelly and Ryan, where his subzero weather reports have gone viral. Before coming to the Twin Cities, Steve spent 4 years working for Hubbard Broadcasting in Los Angeles, California and Albuquerque, New Mexico for the company’s entertainment cable news network REELZ. During his time there, Steve served as a correspondent and anchor for the network’s daily entertainment news program, interviewing many of the biggest stars in Hollywood along the way.

Steve enjoys writing in the third person. He doesn’t think anyone actually reads an entire bio. So if you haven’t given up on this just yet, kudos! You done good, kid.

"Finding Fortune in Failure"
Success. Power. Money. The American dream, right? Yeah…he’s not buying it.
Living in a culture that promotes achievement at all costs, and working in an industry (entertainment TV/radio) that idolizes it, Steve Patterson strikes a stark and refreshing contrast. His dreams came true when he talked his way onto red carpets in Hollywood, going one-on-one with some of the biggest stars on the planet. Then, suddenly, he found himself on the outside looking in. But it was in the midst of that disappointment and uncertainty that he found life’s greatest fortune. And now, he’s experiencing his greatest professional and personal fulfillment, in Minnesota of all places. Prepare to be entertained, amused and inspired!

Work-Life Balance
"4 Kids, 2 Jobs, 1 Wife and My Search for Sanity"
Work life balance. Sounds great! As for actually attaining it? That’s something else entirely.

As the host of a morning radio show and afternoon TV show, Steve Patterson gets what you’re going through. At the end of a day spent talking to and in front of thousands of listeners and viewers, Patterson makes his one-hour commute back home where his most important audience awaits. His family. It’s then and there that his most meaningful work must be done. But it hasn’t been all sunshine and rainbows. He’s made all the mistakes along the way, and now you get to benefit from them! Patterson’s approach is equal parts aspirational and authentic. Here’s to becoming a better professional and person...at Patterson’s expense!

"Steve Patterson’s ability to connect with the audience is unmatched. Through humor and storytelling, he has a way of engaging and interacting with the audience on a personal level. He was easy to communicate with and was genuinely interested in our organization and how we help our members." - Veterinary Hospitals Association

“For our Winter Sales Meeting 2021, Steve did an awesome job in sharing his real life experiences. His energy, humor and humility all blend very well together to keep the audience engaged. I strongly recommend Steve for a presentation that will fit most all venues. This was absolutely fantastic! Thank you so much!” - VP of Sales, FACTS

"Steve Patterson creates an aura of energy and enthusiasm at our Groove Gala event. The 900 guests who attend our Gala find someone who is more than a Master of Ceremonies with Steve Patterson. They find a genuine, authentic and passionate advocate for our organization who can not only communicate our mission with passion, but with conviction. Steve creates a seamless narrative for our guests and program that is engaging and thought-provoking and inspires participation from every one of our guests." - Erich Mische, Spare Key

“Steve contributed much to the success of our Gala. From the time he took the podium, he set the tone for a truly wonderful evening. His energy was contagious. He was prepared, professional and fun! Steve also took the time to visit our organization before the event: meeting with folks and asking questions to gain a true understanding of our mission. We were thrilled with his service.” - Mark Wilkening, Executive Director, Bridging

“Steve has an uncanny ability to layer engaging humor with sincere heartfelt connection in a way that lights up the entire room effortlessly. His skill at reading his audience and finding his access point that both relaxes the audience and makes for a night to remember is unmatched.” - Abigail Johnson, Chapel Hill Academy